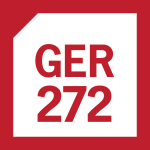 This course introduces students to German culture. But instead of following the standard practice of cultural history – starting with the stone age and making our way step by step to the modern era – GER 272 instead considers some of the people whose artistic, intellectual, or political work have shaped both the culture of German-speaking societies and the world itself. We won’t hit every major figure in German cultural history, but we’ll study some important ones whose contributions still have ramifications today.

What makes this course different?

Well, a number of things:

Actually, come to think of it, that last sentence sums up my whole approach to studying at university, especially in the humanities: engaging with knowledge is all about communicating ideas. Communication is a two-way street, by the way; the whole point behind researching and writing about a topic is to engage others in a discussion about that topic. It’s that simple.

The course is made up of modules; each module is made up of content items. The modules are week-long units in which we work on a particular person and his/her ideas/contributions/influence. The content items are readings, interviews, videos (including some ProfMoments, short lectures by the instructor) that discuss the person and related ideas and issues. Each content item has its own discussion forum where you can answer questions set by the instructor or raise questions and ideas of your own. At the end of each module there is a Module Review, an open-book assignment in which you review the ideas in the module and the discussions about the module.

In addition to the eight modules that make up the main part of the course, there are two other modules. Module 0 takes place the first week and provides an introduction to the course. Module You is a three-stage project (two checkpoints and a final product) where you create a module on an influential German of  your own choosing.

Here’s what you will learn:

Public German Studies has content in a variety of research and teaching fields. Use the widget below to select a category of interest to you, or use the search box to find any text on the site.